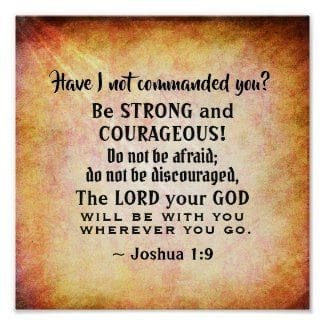 Hello to everyone. I wrote this post up on Facebook this morning, so I wanted to share it here as well.
I learned about trust today, while I had a much needed Bible study and time with YAH
I had a major anxiety attack last night, and into this morning. I knew that the devil was attacking me.
I thought that my happy life was going to change forever, and an anxiety attack washed over me, It clouded my actual knowledge of what YAH had blessed and told me. This Bible verse (photo above) as been my life verse, ever since I was 15 years old. It's always come up, whether in an unexpected way or YAH has put it on my heart.
I am a person who is afraid of change and then will panic about it. I have been disappointed and hurt badly, in the past. I've put up walls and set guards on my heart and mind, ad it sadly took away my trust in Yeshua. I have never fully trusted Him, in these past few years. And it's because I put my trust in people who sadly didn't live up to their words. I have put my trust into what people told me that I should do. I had people make decisions for me, based on what THEY wanted me to do, not what I wanted to do. And it finally built up so many walls and guards...that I now have already suffered from two anxiety attacks.
But, this morning, I started to read my Bible and read some devotionals. And one talked about trust.
It said to start a daily habit of saying "I trust you, Yeshua', in my daily prayers and thought. That never had occurred to me. Trust. True trust.
The kind of trust that will never let you down. The kind of trust that, even in your most darkest and most feared moments, you can trust in Yeshua. I said that, in my heart this morning. That I will trust Yeshua no matter what. No matter how much things may hurt, I HAVE to trust Yeshua. Because no one else, and nothing else, can ever give you shalom (Hebrew word for 'peace') and grace, love and mercy, as much as Yeshua.
My life is changing very quickly. I am in a beautiful relationship with a man that I hope to one day live with forever. I am in a new season of my own personal growth, as I work on my weight loss and learn to let go of my anxiety. And, like I said at the beginning, I am a person who is very afraid. I am afraid to lose all of these beautiful blessings that YAH has given me these past few months.
2020 was very rough for me, personally. And it had nothing to do with COVID. It was just spiritually and mentally hard. But, the last 4 months of 2020 were different.
I celebrated Sukkot for the first time; The Feast of Tabernacles. And you know what...I wish that every day was Sukkot. I was away from all the noise of the world. I was away from social media. I was away from all the people who had hurt me. I was in a simple, beautiful meadow, dancing and singing for YAH. I danced every night. I cried, with joy, every day. I had never felt that way before in my worship. Then came Thanksgiving.
The day that the whole nation, unknowingly to some, thank YAH for all His blessings. I was so happy that day. I have never been that thankful in my life. Then, came an even bigger blessing...my very first relationship.
My boyfriend has made me so very happy. I have never felt this happy, with a young man, in my life. he loves me, he takes care of me, he listens to me and he protects me.
And all of this didn't happen by chance. It happened because I slowly submitted my own fears to YAH. And I have been blessed with beautiful mercies. And now, I am learning to submit something new. Trust.
And this is what I want to say to you all. Trust in YAHWEH, for He will always be with you, no matter how dark and restless this life is. He never fails you. He never confuses you. He will never leave you.
Trust in Him and in Him alone
Shalom and blessings, my friends.
at January 04, 2021 No comments: 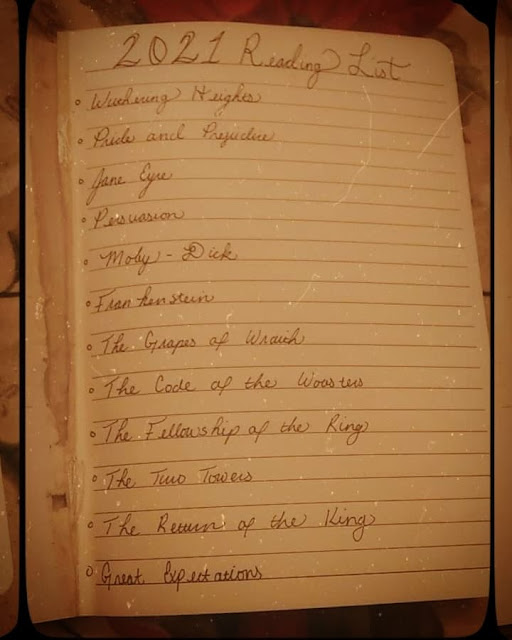 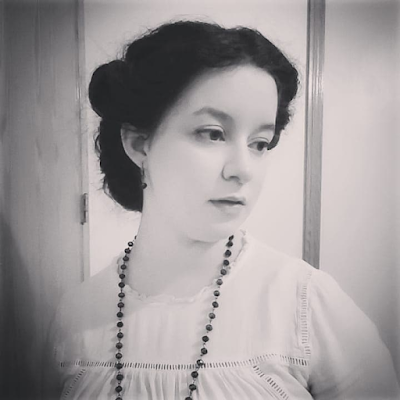 Hello to everybody!
The day is here; December 31st, 2020. I had never expected 2020 to go by so fast. I had so many goals and plans for this year. I was going to visit England again, after going for the first time, back in 2015. I was also planning to see George Washington's plantation, Mount Vernon (a 12 year old me's biggest dream). I had started friendships with people that I had thought would last a long time.
But, as with everyone else, those sudden plans came crashing to the ground. Borders closed, masks were worn, and a giant panic attacked the globe. My travel plans came to a sudden stop, and those friendships quickly fell away.
I ended up at home, trying to find things to do, to pass the slow moving time.
Yet, slowly, the last 3-4 months have been the best of 2020. Starting in September, we began to celebrate the Biblical feasts. Each one blessed my aching soul, and left me with peace (Yom Kippur ('Day of Atonement') and Sukkot ('Feast of Tabernacles') being two of them). Leading into November, I started dating the sweetest man ever. He has made me the luckiest woman in the world. 3 months-ago me would NEVER have imagined that I would be dating in December. But, I am so happy to be dating my dear Sunshine.
Now, sitting here at the kitchen table, writing this post, I am 101% looking forward to what 2021 is going to bring. I'm not going to look at it as another year of virus dread and irritation. I want to look at it as a peaceful year of learning new things, hitting brand new goals, and growing strong relationships.
Speaking of goals, I already have a fun list of this that I want to accomplish this year:
I hope that you all have been able to find peace and joy in 2020, even if it may have started to look like the end of the world. If you truly try your very best to look at life with a smile, I promise you, it will turn out better in the end.
Here's to a brand new year of peace and joy!
Happy New Year everyone!

Hello everyone! I am joining in Classical Homemaking's 2020 Themed Tea Party Blog Hop.

My theme is a Mori Kei Tea.

Starting off is this overview of the little set up I did. 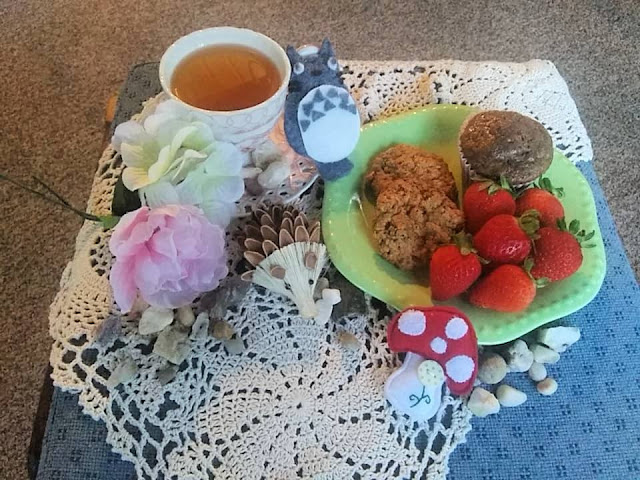 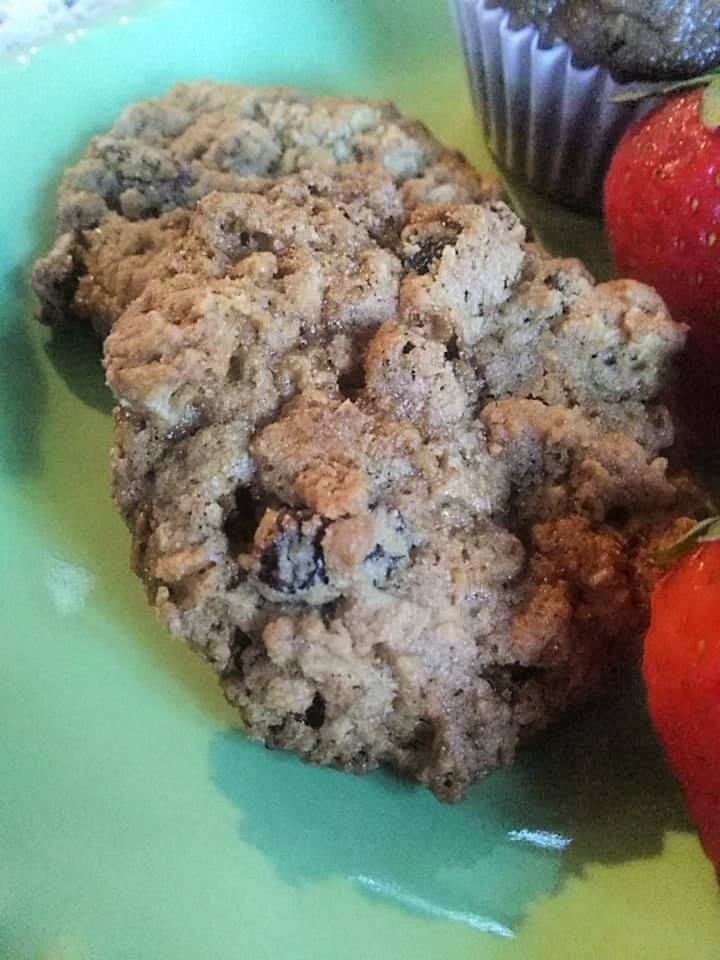 Next are these yummy, Weight Watchers muffins I made. (Recipe link here: Banana Chocolate Muffins http://eleganthomemaking.blogspot.com/2020/08/banana-chocolate-muffins.html) 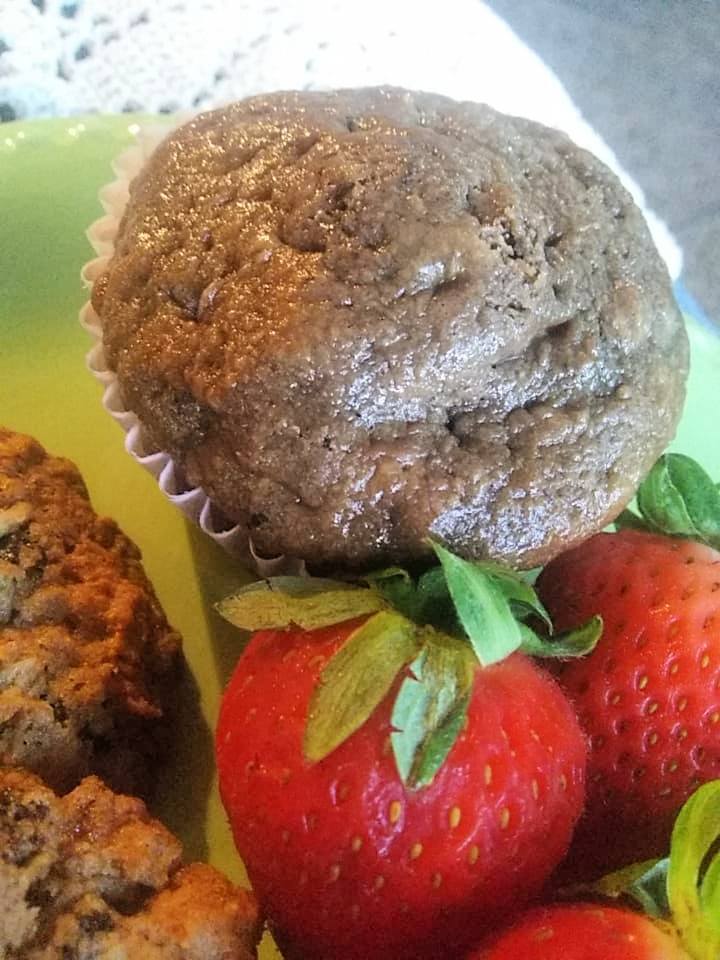 Freshly bought strawberries, to add a pop of colour 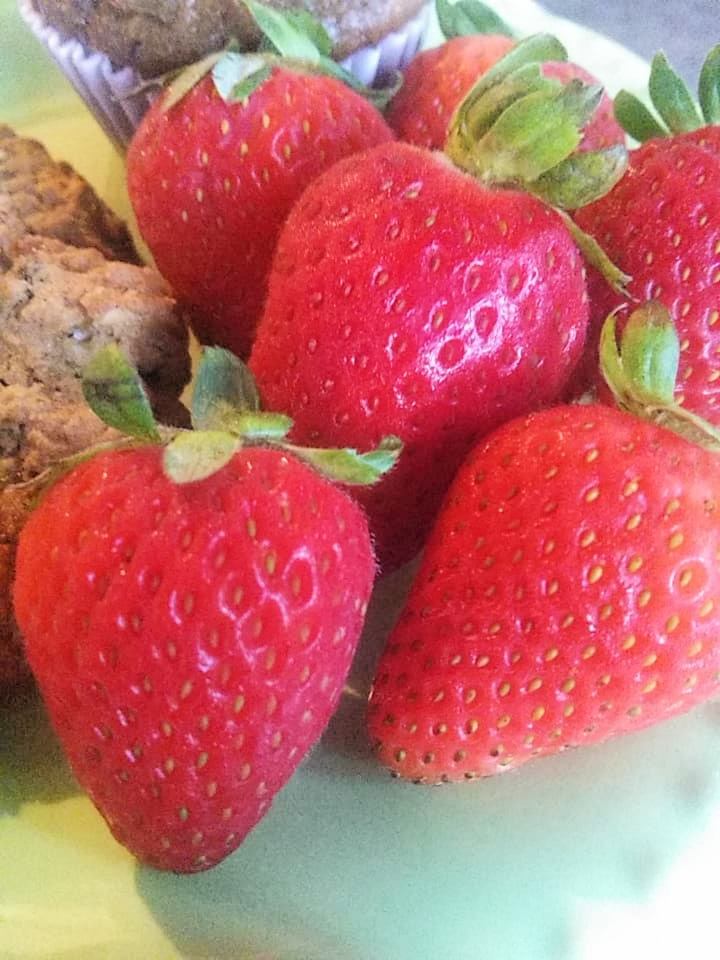 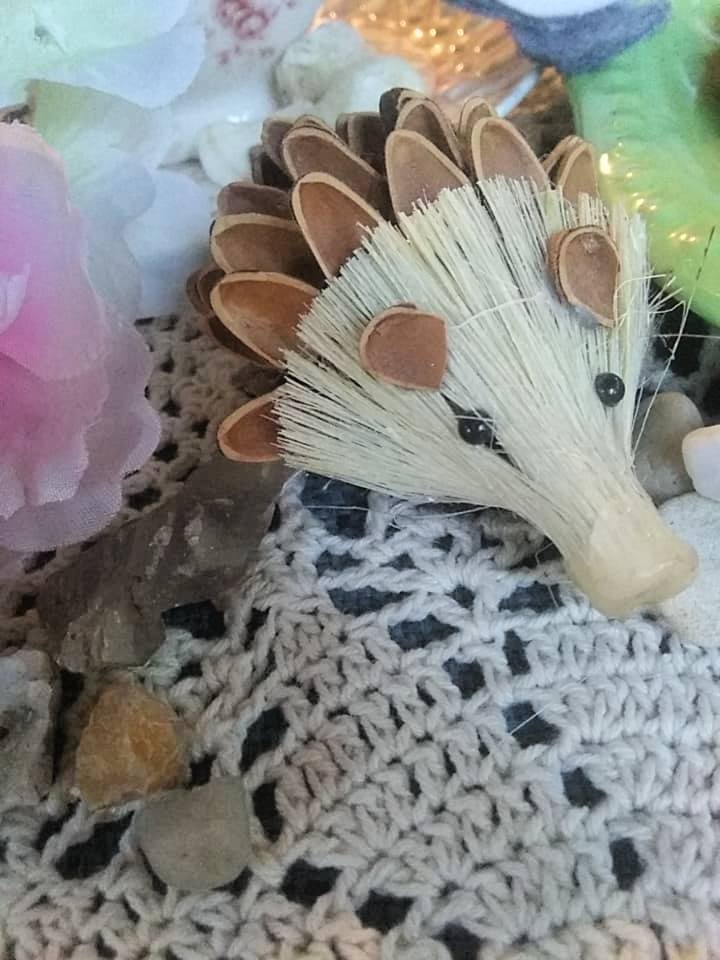 This is a little felt mushroom pin that I made, as a test for my Etsy shoppe. (More about that soon.) 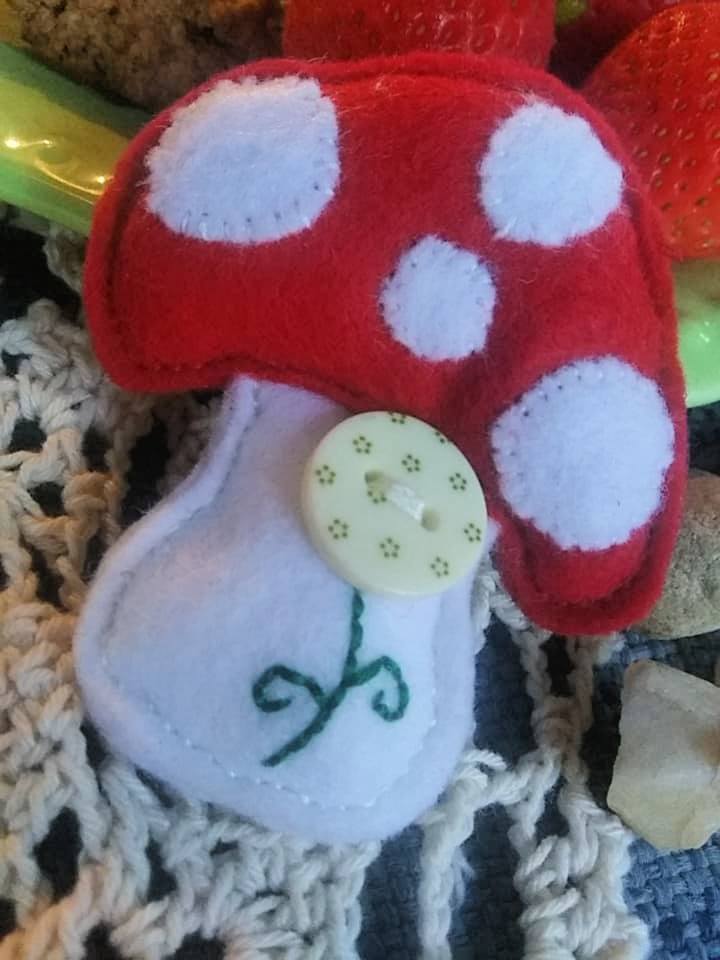 I also made a Totoro pin, which will also be added to my Etsy shoppe. 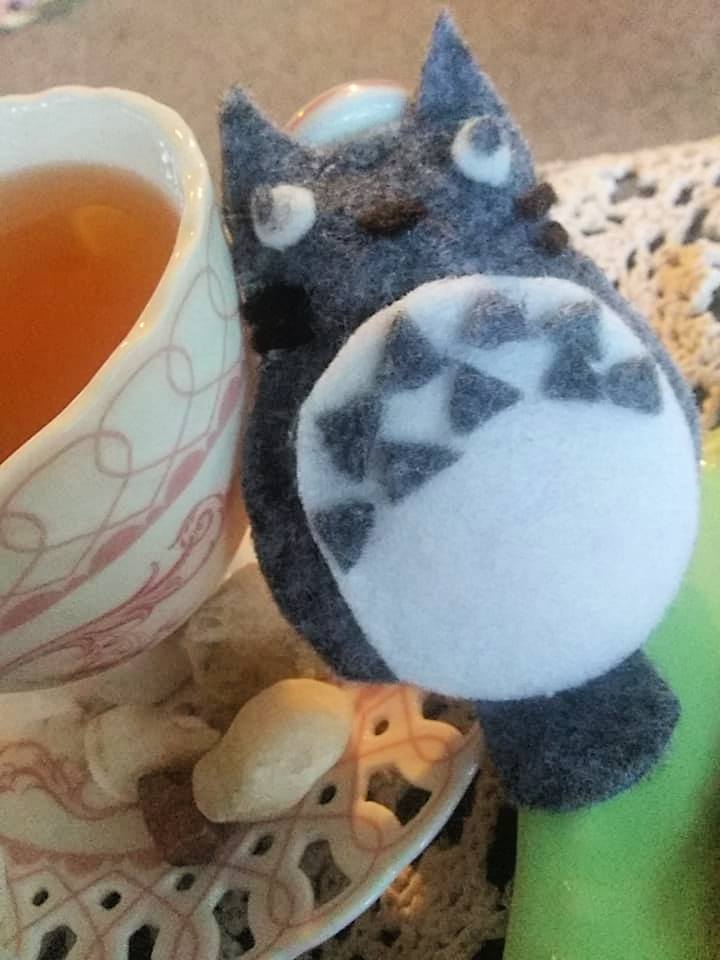 I truly enjoyed preparing this little tea setup. It gave me such a peaceful moment. Indulging in the art of tea has always made me feel relaxed and refreshed.

I hope that you enjoyed my little presentation. Please be sure to check out all the other lovely bloggers' tea posts, and give them much love. 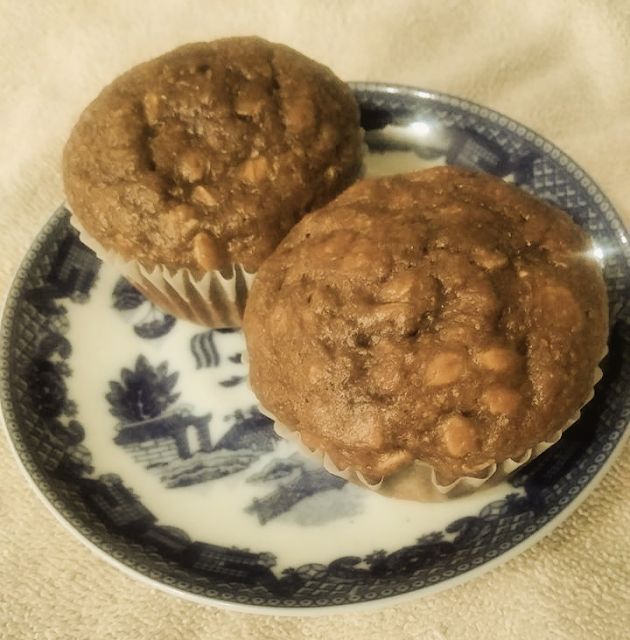 Hello to everyone! As these pandemic times are lasting much longer than we have wanted, I am going to try tho start posting more recipes (and other things).
This recipe has been a favourite of mine lately. It's healthy, yummy and filling.

1. Preheat the oven to 375. Spray, or place muffin cups, in your preferred muffin tin. I have found that this makes about 12 muffins, if you do not double the recipe.

2. In a large mixing bowl, add in all your wet ingredients. Make sure that the banana is well blended, if you don't want banana chunks in your muffins. I would recommend mashing the banana before hand, in a sepereate bowl, rather than in the mixing bowl.

3. Once well blended, add in your dry ingredients. Mix well.

4. Once mixed, add by spoonfuls into your muffin tin. Bake for 15-17, or until a toothpick is inserted and comes out clean.

I hope that you all enjoy this lovely, muffin recipe. I LOVE these muffins, and make them quite often. They are good cold, or warm. I highly recommend storing these in a fridge. They last much longer.
Enjoy!
at August 03, 2020 2 comments:

Email ThisBlogThis!Share to TwitterShare to FacebookShare to Pinterest
Labels: Recipes 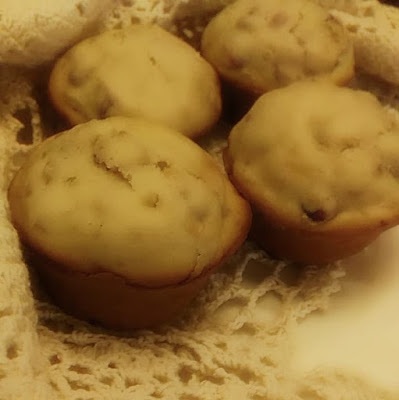 Hello all of my lovely people! I have been so absent, and I deeply apologize for that. I have sadly been out of the habit of posting lately, and have finally convinced myself to start up again. It is already 2020, which is blowing my mind. This year, I hope to flourish in blogging and other writing.
For today, I am posting a new recipe that I tried last week, and got many wonderful results from my family members.
Enjoy!

2. In a large mixing bowl, beat the butter until it is smooth. Add both sugars, and mix until the consistency is creamy. Add the eggs, yogurt and vanilla extract. Beat well, until the mixture is combined well. Once that is finished, add the orange zest.

3. In a large bowl, mix together your dry ingredients. Add the wet mixture to the bowl, and mix with a whisk. Once everything is mixed well, add the milk and orange juice. Fold in the cranberries until well combined.

4. Fill in the muffin cups with batter, up until the cup is full. Bake for 18-20 minutes, or until the muffins are well baked in the middle. I always like to stick a tooth pick in the centre. If the pick comes out clean, the muffins are done. Allow the muffins to cool on a cooling rack, before you store them.

Email ThisBlogThis!Share to TwitterShare to FacebookShare to Pinterest
Labels: Recipes

"My Lady Caprice" By Jeffery Farnol 1912


II
The Sheriff of Nottingham
(Part 1 of the chapter)

Hello to everyone. I wrote this post up on Facebook this morning, so I wanted to share it here as well. I learned about trust today... 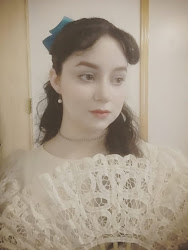